Who are the 300 unnamed athletes who signed anti-trans group’s letter to NCAA? 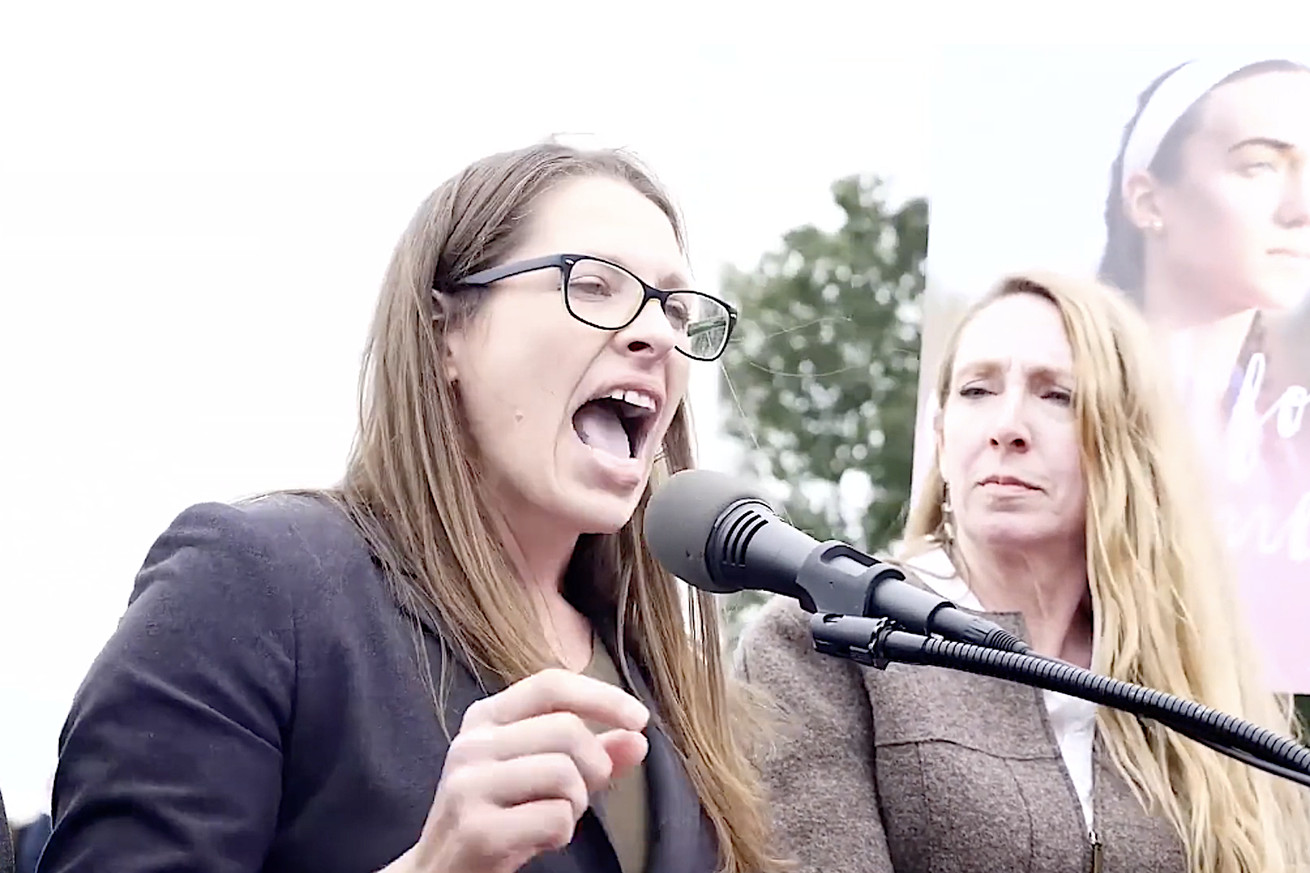 Save Women’s Sports founder Beth Stelzer (above at the mic) was outspoken lobbying against LGBTQ rights last October, but it seems few followed her lead when it came to her group’s letter to the NCAA | Save Womens Sports

Anti-trans group Save Women’s Sport claims more than 300 athletes stand with them in support of Idaho’s HB500, but named only three.

The anti-transgender inclusion activist group, Save Women’s Sports, posted a letter to the NCAA Board of Governors Wednesday, calling for the NCAA not to pull its 2021 scheduled NCAA men’s basketball tournament games out of Boise because of the new state law on transgender athletes.

Opponents of HB500, or as Idaho lawmakers dubbed it, “The Fairness in Women’s Sports Act,” have called for the NCAA and corporations to boycott Idaho. The law bans transgender womens and girls from competing with cisgender girls in any Idaho interscholastic and intercollegiate athletics.

The online letter comes one week after a hearing in the case of of Hecox v. Little, a federal lawsuit challenging that recently-enacted Idaho law. A federal judge promised to deliver decisions on some key issues surrounding the case, including whether the case will be heard, by August 10.

That’s four. And of course Save Women’s Sports founder Beth Stelzer probably signed it, too. Where are the others?

Let’s look at the letter posted on the Save Womens Sports website, which states: “We, the undersigned current and former NCAA and professional female athletes strongly urge you to reject a recent call to boycott Idaho for passing its Fairness in Women’s Sports Act. Such bullying tactics are antithetical to the NCAA values of respect, fairness, and civility, and would send a chilling message to women across the U.S. about the NCAA’s commitment to the integrity of women’s sports.”

Again: Where are the undersigned? Look for yourself:

That’s the letter from Save Women’s Sports. It stands in marked contrast to two letters sent to the NCAA in June when group of more than 60 civil rights organizations, student-athletes, and elite athletes called for the NCAA to pull the games from the state.

On this year’s #NationalYouthSportsDay, the @ACLU and I are calling on the @NCAA to relocate championship events from Idaho after the state passed HB 500, which bans trans youth from participating in high school athletics. Say it with me: trans people belong in sports. pic.twitter.com/YwpQhBFNc5

In each of those letters, those standing up for inclusion are put their names on their stance publicly. Names like Women’s Sports Foundation founder Billie Jean King; U.S. Women’s Soccer star Megan Rapinoe; and the NBA’s first openly gay athlete Jason Collins. Also among those openly opposing this law are dozens of corporations including Idaho’s 5 largest, and five former Idaho attorneys general who believe HB500 was a bad idea, especially during a global pandemic.

As for the other side, it turns out Save Women’s Sports is working hand in hand with the Alliance Defending Freedom, the legal team assisting the State of Idaho in defending HB500. And it also happens the ADF has an answer to the question about all those unnamed signatories to the letter to the NCAA.

In the words of its legal counsel Christina Holcomb, some of the signers are “afraid of the backlash that they might get on social media, of being labeled a transphobe or a hater,”

Well, what do you call someone who is willing to side with the folks who have been labeled an “anti-LGBTQ hate group” by people who know what hate groups look like?

Holcomb’s claim stands in contrast to another claim the ADF has made: that a recent Just the News Daily Poll with Scott Rasmussen poll shows that a majority of Americans support their views. It must be noted that Rasmussen’s polls have been shown to have a clear anti-trans bias in their questions, as an investigation by Outsports’ Ken Schultz documented last year.

The letter was first reported Thursday in the ultra-conservative anti-trans inclusion website, The Federalist, and its report revealed a fourth signatory. One of the Connecticut student athletes who are represented by the ADF in its lawsuit against the state, Chelsea Mitchell, reportedly did sign the letter, even though her name is not on it.

The article also said Mitchell, who is preparing for her freshman season at William and Mary, “lost out” on opportunities due to competing against two transgender girls in Connecticut. It doesn’t mention that Mitchell defeated both of them to win state championships head-to-head in an 8-day span this past season. The wins came days after the ADF filed their lawsuit. Also absent was mention of her 14 career state championships in track and field and being named the Hartford Courant’s Girls High School Athlete of the Year in 2019.

Idaho State University track and cross country athletes Madison Kenyon and Mary Kate Marshall reportedly also signed. Both cisgender women student-athletes seek to join the Idaho case in support of the defense of the law. It was noted that Kenyon wrote an op-ed supporting the law in the Idaho Statesman in June, citing how they lost a position in a race against the transgender woman student-athlete during the cross country season.

What they won’t tell you is that the NCAA’s transgender inclusion policy has been in effect since 2011. They won’t tell you that the transgender student-athlete the ISU cisgender women ran against, Montana University’s June Eastwood, was eligible to compete under the NCAA regulations. In the only meeting all three had during the season, Kenyon and Marshall both finished behind much of the field, not just behind Eastwood, but you can be sure their side will leave that out.

A few others were cited as supporters, including Masters cyclist Jennifer Wagner-Assali. She’s an outspoken rival of a favorite target of transphobes, two-time UCI world Masters match-sprint champion Dr. Veronica Ivy. Wagner-Assali had a lifetime 10-2 record vs. Ivy before losing in the semifinals of the event at the UCI Masters World Championships in 2018.

Their names are in The Federalist. Why not put their names on the letter? Because of fear of being called haters?

I’d like to think even amid transphobia and standing against inclusion, there may be a twinge of embarrassment.

The embarrassment of standing with groups who would openly demean, omit and even lie about someone’s children.

The embarrassment of claiming to stand for women’s rights, yet working with groups who have made blocking women’s rights a holy crusade.

The embarrassment of standing in agreement with a statistic in their letter that belittles the record of one of the best athletes in the world, of six-time Olympic gold medalist and four-time World Athletics champion Allyson Felix: “In 2018 alone, 275 high schools boys ran faster times”. Such is the playbook of those who use sport to sell transphobia. The idea of misogyny and transphobia hand-in-hand to say transgender women aren’t women and cisgender women are inept at sports.

Oh, by the way: The anti-trans, pro-discrimination lobby says nothing about transgender men, but a prominent transgender man in sport has something to say to them:

Students who are transgender simply want to play the sport they love & be a part of a team, just like any other student.

As of press time, the NCAA governors have not announced a decision on 2021 and aren’t expected to until they discuss it at their August meeting.

EDITOR’S NOTE: A prior version of this story misspelled the name of the head of Save Women’s Sports. It’s Beth Stelzer, and the spelling has been corrected. We regret the error.

Unikorn Shop sells a huge variety of curated articles for every preference. Unikorn sellls everything, from lesbian flags to adult toys, and even pride stuff for pets. You can also get free shipping if your order is €50 and above, and 10% discount for your first purchase for the same amount in your cart. Find the best LGBT pride merchandise below:
Facebook Twitter Pinterest Telegram
Newer Right-Wing Texas Lawmaker Who Compared Coronavirus Restrictions to ‘Socialism’ Nearly Dies from COVID-19
Back to list
Older Reconstructing ballroom history reveals generations of change
close